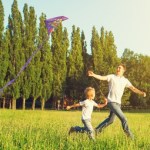 A young boy was spending a glorious Saturday afternoon with his Dad. They were flying the new kite that the boy had received for his birthday. The gentle breeze was perfect for launching the kite and keeping it up in the clean, crisp air.  The sun was shining but not brutally hot; a perfect kite flying day.

As the boy let out the line a little bit at a time, the kite flew higher and higher. It was so much fun to see the kite dancing and bobbing in the sunshine! He felt the kite pulling against his hold on the reel. There was no more line to let out! He wanted to see how high his kite could go, but there was no more string. “Daddy,” he pled, “let’s cut the line so the kite can fly higher!”

Dad tried to explain to the boy that if they cut the line the kite would fall. The boy wasn’t buying it. It didn’t make sense! He could feel the kite straining against the reel, pulling the line taught, seemingly trying to go higher than the line would allow. Finally the wise father agreed to cut the line and stood by as his disappointed and confused son sadly watch the kite fall into a tree. The line, the very thing that was holding the kite back, was also what enabled it to fly.

In our lives there are also elements that enable us to fly, but may feel like they are holding us back. They are sometimes called rules, or laws, or commandments. In a more general way, they can be called “structure”.

I have learned that in order to have a great day, I need to get to bed early the night before and get up early in the morning. (See D&C 88:124.) Years ago, I stayed up late to try to get everything done. I was so exhausted by the time I got to bed that I woke up late and was still tired.  I wasn’t very productive, and I felt frustrated and overwhelmed. It took a leap of faith to try going to bed early and getting up early, but putting that structure in place in my life has given me productivity and accomplishment I never had before.

I have lived through periods of time when money was very tight. If you don’t have enough money to pay the bills, it is tough to believe that paying tithing could help. Another leap of faith, and willingness to try it and I found that the blessings that came to me from paying tithing far outweighed the apparent shortage of money. I found that I couldn’t afford not to pay tithing. Over time I learned to first eliminate and then stay out of debt. Structure in my financial life has given me peace of mind and freedom that I never had when my money managed me, rather than me managing my money.

I am a compulsive eater. In the days when I ate anything I wanted to, whenever I wanted to, I had to wear clothes much larger than what I wanted to, and my thinking became as compulsive as my eating. A compulsive eater cannot just stop eating, like a drinker can stop drinking, so what I had to do was put structure in place around my eating. I started by writing down everything that I was eating, and figuring out what actually satisfied me. I started planning my meals, including when, what, where, and how much I would eat. When I eat mindfully, according to my plan, to nurture my body with food that is good for me, I am not compulsive, and no longer think obsessively about food. This is what I have called “Planned Abstinence” in another post.

« Peace: It Is What It Is
Persistence – Doing the Footwork »