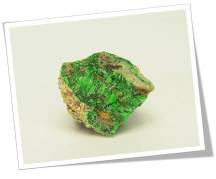 She was hurt, wounded to the core by the abusive words and looks, the judgment and criticism. “I am going to run away,” she thought. “No one will care if I never come back here again.”

She went for a long walk out into the desert, nursing her wounds, reflecting on the injuries she had sustained at the hands of those who should have been kind and loving, and their total lack of any redeeming qualities.

She passed a man who was walking the other way. He smiled and told her that if she was looking for some desert souvenirs, she should walk a few feet off the path over the rise just to the east.  She decided to check it out.

When she got to the top of the rise she saw what he was talking about: beautiful rocks. They were green and gold with small crystals embedded in them. Just looking at them helped her to stop obsessing about her tormentors; just a little. She walked down and picked one up. It was small enough to hold in her hand, and particularly pretty. She decided to take it with her. She hoped it would comfort her.

Suddenly she noticed that the sun was starting to go down and she headed home. Nights are cold in the desert; cold, and dark, and scary.

Over the next few days she thought endlessly about her misery. She held the rock in her hand, and pressed it to her heart as she cried, filled with hurt and resentment.

She called a kind, wise  friend one day, and shared her feelings. He told her that he was in her neighborhood, and would drop by. He listened as she poured out her heart. He noticed the rock and asked to see it. “Where did you get this?” asked her friend.  She told him the story about the walk in the desert, the stranger and the beautiful rocks.

“You can’t keep this,” declared her friend firmly but gently. “Why not!” she exclaimed. She could not understand why someone who cared about her would want to deprive her of the very thing that had brought her some peace and comfort and provided a distraction from her obsessive feelings of anger and resentment. She recoiled, holding the rock to her chest.

“No, it’s mine! I won’t let you take it. I deserve to have something to bring me pleasure. Why would you want to take away the one thing that has dulled my pain these last few days?”

“Because,” he explained, “that rock contains uranium and is radioactive. It will make you sick if you keep it, and will burn your heart if you keep holding it that way.”

She dropped the rock on the floor and her friend wrapped her in a loving embrace. “It will be alright,” He said. “Give me your hurt, your anger, your resentment and your pain. In exchange, I will give you peace and rest.”

« Progress – Climbing through the clouds
Prayer, Meditation and Pondering »

3 thoughts on “Rock of Resentment”